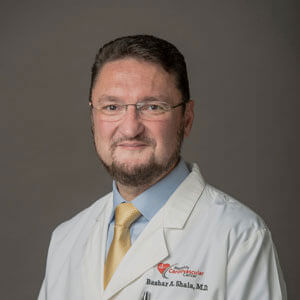 Dr. Shala is the founding physician of Memphis Cardiovascular Center. He started his Internal Medicine Residency training at the University of Tennessee in Memphis in 1991, where he was Chief Medical Resident in 1994. He then became board-certified in Internal Medicine and practiced General and Emergency Medicine. From there, he went on for additional training and a Fellowship in Cardiovascular Medicine in 1996 where he also served as Chief Cardiology Fellow. This was followed by another Fellowship in Interventional Cardiology in 1999, after which he attained board certification in cardiovascular disease, interventional cardiology, echocardiography, nuclear cardiology, and cardiovascular computed tomography. Dr. Shala has been practicing Cardiovascular Medicine in Memphis since 2000.

Dr. Shala has received numerous awards and honors, including multiple Physician Recognition awards from the American Medical Association and the James Givens’ Award for Excellence from the University of Tennessee. Dr. Shala was recognized by the National Committee for Quality Assurance for his excellence in cardiac care.

Outside of work, Dr. Shala has an intense interest in promoting philanthropy and interfaith relations; he speaks regularly to faith-based organizations around the Memphis area. He was also the recipient of Diversity Memphis ‘Humanitarian of the Year’ award in 2011 and the prestigious Roosevelt Institute Freedom of Religion Award for 2017.